The OWLP landscape provides extensive wide views and contains huge skies, while being dominated by rivers, drains and ditches that cut across some of the most productive agricultural land in England. This landscape means different things to different people: some can find it featureless and intimidating whereas others find it exhilarating and value its tranquillity and distinctive lifestyles.

Now we have finalised the boundaries for the Ouse Washes Landscape Partnership scheme and we have a defined area, the following question may need reconsidering: what is it that makes the OWLP area special?

In a previous post, I have set out what came out of workshops held regarding the unique qualities and ‘specialness’ and ‘distinctiveness’ of the OWLP area. As part of further discussions with our key partners, ongoing research and discussions with local community groups, we have been able to refine this information.

This then also fed into the Landscape Conservation Action Plan, a key document we recently submitted as part of our stage 2 bid to the Heritage Lottery Fund. The below word cloud formed part of our ‘Statement of Significance’ and sums up what we believe makes the OWLP area special: 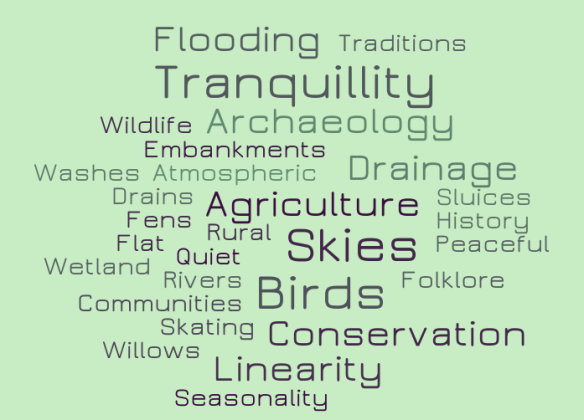 The OWLP landscape is of important for several reasons:

At 3,000 ha the Great Ouse Wetland network , which lies fully within the OWLP boundary, is one of the most extensive and most important wetland areas in the UK. It comprises of a network of nature reserves, many of which are owned by nature conservation bodies, including the WWT Welney, RSPB Ouse Washes nature, RSPB Fen Drayton Lakes and RSPB Ouse Fen reserves, with further schemes planned including those to be created by the Environment Agency near Sutton and Coveney. Within the heart of this landscape is the Ouse Washes itself, one of the most important areas of lowland wet grassland in Britain.

The expanding network of reserves form a crucial core area in the proposed Fen-wide ecological connectivity network of wetland habitats, crucial for the survival of many rare and endangered flora and fauna species. The restored wetland areas which incorporate a particular high percentage of lowland meadows and reedbeds provide for a tranquillity not easily found elsewhere.

The OWLP area is of at least national significance for its repository of well-preserved, often waterlogged archaeological and palaeo-environmental remains. The OWLP area contains 18 Scheduled Ancient Monuments, including the well-preserved Earith Civil War Bulwark and several clusters of prehistoric barrows. The area contains especially rich prehistoric and Roman Period archaeology. The abundance of prehistoric remains in the southern part of the OWLP area demonstrate clear evidence for a major prehistoric ceremonial landscape, extending right across the floor of the Great Ouse valley.

This man-made landscape lies largely below sea level demonstrating man’s amazing efforts in drainage engineering, executed here on a grand scale: with its abundant sluices, banks and dykes the whole landscape can be considered as a civil engineering monument. Human intervention regarding its management is as vital today as it was when, in the 17th century, the Ouse Washes in between the Bedford Rivers were created. The survival of the nationally significant Bedford Level Corporation archival collection, curated for by Cambridgeshire Archives, provides us with a unique insight in the historic developments of the drainage schemes in the area.

The landscape has also played host to some amazing social, economic and environmental experiments including the Flat Earth Society using the landscape to prove the earth is disc-shaped, the utopian social living experiment at Colony Farm in Manea in the mid-19th century, and the late 20th century hovertrain experimental track.

2 thoughts on “What is special about the OWLP area?”