This time I wanted to share some pretty pictures with you and take this as an opportunity to talk about another habitat creation scheme in the area. Both pictures were taken by a colleague late last week, just before the Ouse Washes area started receiving heaps of snow – with the frost on the trees and on the ground the landscape already looked in the grips of winter. 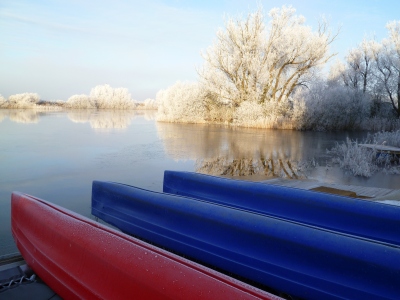 These pictures were taken at Mepal Outdoor Centre. Cambridgeshire ACRE has recently taken over the management of this outdoors sports centre and will start running it as a varied and viable business this spring.

Mepal Outdoor Centre is located about a mile west from the Old Bedford River and comes with substantial grounds including a 20 acre lake. Not only is this a great location for the watersports and other outdoors activities on offer, there is also some woodland and the lake attracts a lot of wildlife as well.

In addition, across the road (the A142 between Ely and Chatteris) a large wetland area will be created over the next decades, Block Fen, which will eventually link this site with the Ouse Washes. Following aggregate extraction, part of the Block Fen area will be turned into an important wetland reserve including lakes and lowland wet grassland habitats. See for instance here to understand what is happening at Block Fen.

This will happen in stages over the next half century or so. The eventual results at Block Fen will have a dual function: additional water storage to reduce flood risk, and the creation of lowland wet grassland areas to compensate for the loss of similar habitats within the Ouse Washes itself, giving especially wintering and breeding birds the necessary environment being lost in the Ouse Washes washland due to more frequent unseasonal flooding. See also this previous post for a discussion of similar schemes at the south end of the LPS area. For some pictures of the lakes and wetlands already created at Block Fen, look here. 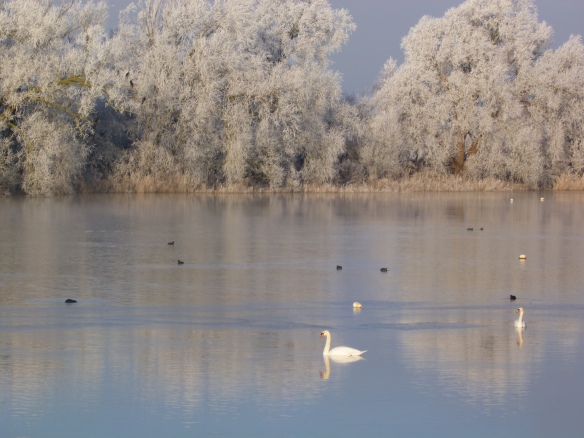 With its convenient location pretty much halfway the extreme ends of the Ouse Washes LPS area, Mepal Outdoor Centre is also likely to play an important role in the delivery phase of the Ouse Washes LPS project. Several of the scheduled projects which will take place in and around the Ouse Washes between 2014 and 2016 will involve the provision of training days for volunteers in land management, biodiversity and archaeology. It is envisaged that many of these training sessions will be held at this centre, where most facilities for this are already in place.

By the way, if you have taken any nice pictures of the Ouse Washes in the snow and are happy for me to share these on this blog, please send them to me.